I've been listening to a lot of Los Cripis, in particular Our First Album.

The other day we were in a warehouse store, looking at head-high stacks of consumer excess while shopping for staples, and the awesome chorus of "Freaky Bonnie" kept going through my head:

Posted by Jake Anderson at 9:46 PM 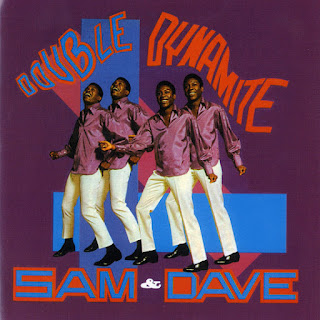 Listening to a lot of Sam & Dave this morning - I had never really done a deep dive into their catalogue. The album cover for Double Dynamite is blowing my mind a little bit.
Posted by Jake Anderson at 9:35 AM

A client at work wanted us to mail a "computer disk." Does this mean a 3.5" floppy disk, I asked? Yes it does. I looked around my various clutter pits and found no 3.5 floppies that didn't say something like "Lost Treasures of Infocom" or "howtoremixroseforbohdan"*.  I have lots of 5.25" floppies - so many of them - but no 3.5".

To the internet we go. I found a dude in Gladstone who had a couple boxes available. I considered biking over, but reconsidered, given the heavy wildfire smoke in the air. And given that I'm already buying emergency floppy disks in 2022, this experience was going to be weird enough as is.

The client also wanted some cassettes, so I'm high-speed dubbing recordings of government forms over some blanks that were initially meant to hold Tualatin Summer EPs. The plowshares we beat our swords into, indeed!

Also, I like the fact that, through the magic of high-speed tape dubbing, I'm hearing a Chipmunkified version of my coworker's voice just a couple days after ranting about the Chipmunks. I love how the universe works sometimes.

*I also love that Deathbomb Arc put out a 3.5" floppy back in the aughts, back when floppies were that annoying technology that wouldn't go away and that no one liked.

Posted by Jake Anderson at 1:44 PM

If you could press a button that made the music of the Chipmunks go away forever, and no one would ever know about it, would you press it?

Note: Pressing this button would not harm Alvin, Simon, or Theodore personally - it would just mean that their singing would never be brought to the attention of humans.

This would also have the side effect of removing all Chipmunks imitators and hangers-on, such as the Nutty Squirrels:

For the record, the official Tape Mountain Secret Blog position on the Chipmunks Button is that we would press that button until our fingers hurt.
Posted by Jake Anderson at 3:15 PM

We went to the El Tigre festival in Tigard this weekend. It is pretty awesome that Tigard has become less lily-white* in the years since I graduated from Tigard High School, and even better to see the city celebrating Hispanic Heritage Month with a festival. We ate pupusas and drank mangonadas in the sunshine. The boy asked for paletas a million times but then, by the time, we got to the front of the line, he changed his mind and got a raspado.

The musical lineup was a big factor. As climate change turns the Portland area into what is essentially Modesto with Douglas firs, actual Modesto combo Valley Wolf played a delightful set, including their woozy end-of-summer jam "Corazón." It was as good as I had hoped. We danced in the wildfire-smoke-filtered sunshine while thirsty bees drank the bubblegum-scented liquid from the raspado my kid spilled.

There's a charming video for you to watch:

*(Note: Tigard High's mascot is, indeed, the Tigers - shocker - but in my high school days I made a lot of jokes about how it should be the Lilies)

Disco: unifying force of the world

In my most recent post, I went on about Jimmy Salcedo y su Onda Tres's Vallenato

which takes that particular style of Colombian music and slathers it with disco Vaseline, with highly appealing results.

The more I listen to it, the more it has in common with its much squarer American cousin, Myron Floren's Disco Polka:

Notably, both TV music dudes who made at least one delightful and highly cheesy disco record that incorporated their particular local flavor into the tsunami of 4-on-the-floor disco that swept the universe in 1977 or 1978.
After listening to this stuff, YouChoob keeps telling me that I want to listen to Wire or Can or something, saying, come back from the dark side, but I'm doing all right over here, YouChoob. There's time for that stuff later.
Posted by Jake Anderson at 4:28 PM

They come up in my shuffle play every so often and that makes me remember that I love them, and then I get the song "I'm Going to Buy Food" stuck in my head every time I go to the grocery store. They were a thing about a decade ago and now their songs are approaching the age of link death and bit rot, so I've been snapping their stuff up cheap before it becomes unobtainium.

The Raincoats' "Animal Rhapsody": I never quite got Moving despite being way way into their first two albums, but I recently checked out the book about the Raincoats' 1st album from the library and that helped me dig deeper. I still don't understand why the 90s reissue of Moving left off so many of the songs - hearing the songs they left off, I think I would have liked it better with those songs included? Anyway, disco-fied synth bass Raincoats with horns is a good idea:
Speaking of disco: I was reading about Elia y Elizabeth and realized I'd never checked out Jimmy Salcedo's stuff. I found a bunch of stuff. I asked my Colombian coworker if she was familiar, and she immediately said, oh, El Show de Jimmy! So this rabbit hole goes pretty deep. Vampisoul, bless their hearts, is putting out a retrospective next month. This album is almost certainly post prime, but it is pretty bumping nevertheless:
I bought the cheapest copy available on Dwisqwogz (three bucks). Oh yeah.
Posted by Jake Anderson at 3:29 PM