And finally, old media and realizing how far we've come

My beloved archive.org has a cache of old Flipside punk rock magazines from the early 80s. Kind of great to read all of the eternally-hashed-out punk rock arguments when they were relatively new and fresh. But also kind of shocking to 2023 ears to hear endless SoCal bros endlessly tossing out homophobic slurs. Man there are so many of them. Flipside 32 has an interview with the Big Boys in which Randy Biscuit Turner talks about his pink cowboy boots, and there's a picture of him in a tutu. and reading about him in the face of all of this F-word garbage in the Letters section makes me appreciate them even more.

I've been riding my new exercise bike up in the office during lunch breaks at work in the rainy/cold Portland winter. I bought it from some lady in a Clackamas mobile home park - I drove into this weird manufactured-housing labyrinth in winter-solstice darkness - and that was weird, but eventually I found her and thankfully it folded up into my subcompact just fine.

This winter I've been replaying the Fable series of video games while riding the fake bike - turns out endless fetch quests in a pretty world are just what the doctor ordered for exercise entertainment (exertainment) - and when I finally finished the main quests I went back to playing Madden 12. I don't really see the point in buying any more recent pro football games, particularly since I haven't watched the real thing in years anyway - and there's a lot to be said for just annihilating one's opposition while also crushing calories.

It's hard to believe, but endlessly destroying the digital NFC North gets boring after a while, so I'm rewatching old 30 Rock episodes, starting with season 2 because that's what I had on hand from some garage sale or other. Pretty funny, and "Werewolf Bar Mitzvah" will be in my head for a while, though it's weird to hear this show that's otherwise so smart using transphobic slurs and playing up the gayz for the laughz. 2007 doesn't seem that long ago, but I guess it was?!?!

Videogames part two for the evening

The boy (now 6) has gone head over heels for Animal Crossing: New Leaf. I was playing that game during his first year or so of life, digging up fossils and catching fish with a little guy snoozing on my chest, and now here this kindergartner is just devouring this really text-heavy game with a passion. Today on the way to the library he asked me "when did you move to town?" "Oh, Portland?" I asked, prepared to tell him stories of young and zitty me in a Reagan-era lumber town. "No, Animal Crossing," he said. It is nice to see this thing that I spent a lot of time on through young and totally obsessed eyes.

I've still never played the new version for the Swytxch. I have this good/bad habit of not buying consoles until the next generation comes along and everything is really cheap. I figure I'll give things another year or so post-pandemic and see if prices come down. We'll see if I can hold out, though, especially once he starts going on about it to his classmates and realizes there is a new and shinier version out there.

I've been playing this loony Bubble Bobble sequel called Parasol Stars. As ridiculous as a game about dinosaurs blowing bubbles is, this sequel is even more ridiculous. It is delightful. Like any game requiring any coordination whatsoever, I'm terrible at it, but it's fun.

Posted by Jake Anderson at 9:44 PM

The best webpage, plus joysticks

I understand there may have been some arguments about this subject, but for me, the best webpage is obviously Atari Compendium's list of VCS controllers. It goes on and on, telling the story of a million ideas, mostly bad, crapped out in a gold rush environment in a very short period of time. Boy does it go on. There are so many of them. Mercury-switched Le Stiks that kids held in their hands? Check! Combination joystick/paddles, almost none of them usable? Checkarooni! Shapes that no hand could ever really grasp? You got it! Something called the "Obelisk"? There is an obelisk. It goes on and on and on and on.

"Retrogaming" is, as we all know, a pretty stupid hobby, especially if real money gets exchanged in the process, but I might make an exception for weird old joysticks. I don't need them to plug into any authentic hardware - the 2600-daptor works fine for my purposes - but there's something tactile and pleasing about these old crapsticks. And unlike the mechanical keyboard thing, joystick hunting remains clunky and funky and resoundingly uncool and, therefore, largely cheap.

Posted by Jake Anderson at 9:36 PM

I've always had a maybe/well-maybe-not relationship with the Roches. They're one of those bands whose sublime/ridiculous ratio seems to have a very high standard deviation. Did I get that right? I did badly in stats class several decades ago. Anyway, I picked up their "Collected Works" AKA best-of album for a buck at the library's used book store last weekend, and it does a pretty good job of making their case. "Hammond Song" is pretty perfect (though the collected-works version maybe turns down the guitar solos a bit?), "Want Not Want Not" is at a largely unplumbed intersection of novelty-music/polka/bad-trip/experimental, "Nurds" is a lot more compelling and horrifying than I had thought, "One Season" hits a totally unexpected and perfect spot at 2:00 in or so. Getting their killer minus the filler helps me go back and appreciate the filler a bit more. My family members remain unconvinced.

Fire Roast is one of a million Nina Ryser things, and I'm not sure what happened with this particular outfit - they put out a tape on the great Single Girl Married Girl smack dab at the beginning of the pandemic, and then silence. It's been next to my tape deck ever since. Ms. Ryser's work in Palberta, Data, and solo is also at an uncomfortable intersection between genres at times, and I don't always click with all of it, but this album is great and consistent from start to finish. Zoë Talkin's shredding bass work takes things to the next level. (Shades of Cris Kirkwood, maybe even Trefor Goronwy's work in Camberwell Now if you squint.) It's one of those albums I always gravitate toward on Monday mornings, when "Back in the Sulfur" feels a little too real. "Desire's Hold" is universal and confounding in all the right ways.

_Gelatin Duplicator_ on the way (plus Cromemco)

Today I fired up the IBM Wheelwriter 5 and made some covers for the new Spirit Duplicator album Gelatin Duplicator. My typewriter's 1984-era brain is able to store an album cover's worth of liner notes in proportional-spacing type* (Thesis PS in case you were curious)**, so I stored a bunch of text in memory with the intent of mass-producing album covers on a typewriter.

This is obviously a situation in which nothing could ever go wrong. I realized something was a little screwy and the left margins were going all over the place. A competent typewriter technician could fix this, but I decided to live with it. I mean, you could make your Chartpak/Letraset lettering straight, but that would not be very punk rock, would it?! So this is like a lazy version of that.

With all that being said, it is totally impressive visually and sonically to let a Wheelwriter go nuts. I took a slo-mo video and it is pretty hypnotic. And toward the end of the batch, the typewriter appeared to ungum itself and create consistent margins.

I'll draw a bunch of ring modulators with silver Sharpie in the next few days and put this thing up on Archive.org and Blandqlampt. Watch this space.

* I could store a lot more monospace type - Letter Gothic has featured on multiple album covers so far and will come up again I'm sure - but come on, proportional spacing on a typewriter!

**OK, rabbit hole descended into with thecomputerarchive.com. Currently looking at a 1980 Cromemco catalog and totally loving how neatly it sits at the interface between 70s and 80s aesthetics. Calligraphy on a computer front panel - how much would it blow up the world if a modern computer used hand lettering on its front panel? I could go on. 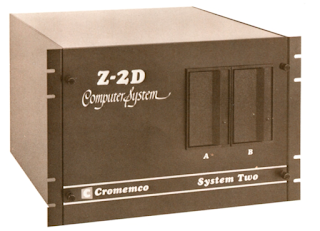