I can't get enough of POLKADON DB's endless YouChoob playlist of Ukrainian-Canadian polka. Currently at 697 songs and uploading more every day. Back-of-the-envelope math shows that this playlist is probably at over 24 hours of polkas and waltzes and kolomaykas and other terms that I don't know. Quality varies, but even the jankier stuff has its own charms. An unceasing joy.

While the boy sleeps I've been playing Sneakers on an Atari 800 emulator on my laptop. What a loony one. Recommended. I miss the weird ovipositor spaceship birthing animation that the Apple II version has, but it's nice to play the game on:

the Kraft Mazemaster joystick that I bought for $5 at a certain game nerd expo in Portland a few weeks back. I went looking for info on the Mazemaster and found that, of course, there are a LOT of YouChoob videos consisting of dudes standing in front of a wall and talking about old game controllers. I will spare you the video of me talking about this thing, but it is very nice.
Posted by Jake Anderson at 11:14 AM 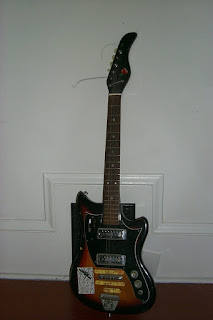 I bought my first guitar from Fred and Toody's guitar store Captain Whizeagle's in Portland on my 17th birthday way back when. I don't know if my memory of the place is at all accurate but I remember it feeling like a place of infinite possibility. My guitar was the cheapest thing in the store (of course), and I think even the people who sold it to me realized it was terrible.  But even that price still represented what, upwards of a week of after-school dishwashing work at four-something an hour? Anyway, we threw it in the back of the family's minivan and headed back to Tualatin.

What a piece of garbage. It wouldn't play in tune without a capo. The tuner for the low E string fell apart almost instantly, and the other tuners barely worked. Electrical issues aplenty - it buzzed, the switches didn't work, it cut out randomly. Terrible action, wobbly neck. Ugh.

But it felt good when it was all I had. I plugged it into our old tape deck and turned the input level all the way up and it was glorious. Or into a four-track later. Here's a song from a little later (from Yak Ampersand's Steadfast, Unalterable, Unyielding) that features the five-string magic in action.

I have owned many guitars since then and can confidently say that this was almost the worst one I've ever owned.

RIP Fred C and much love to this old thing, wherever it ended up. Eventual owner, I hope you kept the Catsup Plate stickers and the furniture decal I put on the headstock.
Posted by Jake Anderson at 11:05 PM

Getting back into the blog many years later. Doing it!

Space Conquerors was actually a retitling of "Empire I: World Builders." There.

Having the manual in hand removes some of the mystery, but most still remains. If I had the infinite time I had in my youth combined with the advanced deductive skills I have as a crafty middle-aged person, I might figure out how to finally make it as a space missionary.
Posted by Jake Anderson at 10:41 PM