I think I finally get the 13th Floor Elevators. Digging Easter Everywhere as a desperate late-summer jam. Not sure if I love the rest of their oeuvre but I'll probably get there.

Today I dropped the boy off at daycare (just a few more days) and stopped by the office to handle some tedious in-person tasks. On the way out I was blasting "Slip Inside This House" with the windows open in my subcompact, and a minivan passed me with ITS windows open playing "I Want You (She's So Heavy)". It was a little eerie. Same key, same tempo. Totally could be a geezer-rock mashup. It was a moment. I wonder if the minivan driver also felt it.

I drove past the Russian bakery and the dispensary and the subsidized housing and headed onto the freeway home in that eerie late-August light.

It's hot and the sun is a big malevolent lemon sucker in the sky and so naturally my computer-assisted brain decided that I wanted to watch Vainica Doble's "Caramelo de Limón" several dozen times in a row:

Vainica Doble are great. I wish more televideos existed for their stuff, particularly the stuff on "Heliotropo."
Somehow I forgot to turn off YouChoob's "Play stuff that is somehow vaguely algorithmically related to this thing" and I ended up going down a Romance-language early-70s TV music rabbit hole. It ended up here:
which is at some unthinkable WTF intersection between unspeakably cheesy and kind of hottt. Nothing really makes sense right now, so let's just go with it.
Posted by Jake Anderson at 2:47 PM

My job sometimes requires me to do weird things, weird boring things. In this case, I needed to record a cassette tape to send to someone on behalf of the state.

You'd think that "Tape Mountain" would mean I would have a cassette deck that actually records, but ha! ha! that's thoroughly incorrect. Instead, I have a bunch of tape decks with snapped belts that have turned to goo, or a sweet midlife crisis garage-sale Nakamichi that, by the way, doesn't record. Ordinarily not a big deal, but today it was!

So I dug Ye Olde Tascamme Porta Twoee out of the garage and connected a bunch of unlikely cables, and - lo and beholdde - it works! I'm shocked but delighted. 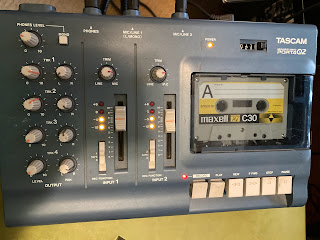 Posted by Jake Anderson at 5:47 PM

The boy is starting to outgrow his (excellent) second-hand bike trailer, so I figured, now that kindergarten is upon us, maybe it's time for a cargo bike? I considered buying an e-bike, but those are super expensive and I'm used to riding "acoustic" bikes a long way under heavy load anyway, so I bought a second-hand Yuba Mundo off the second-hand site that is not Kraigzlizst. It is blue and pretty.

After handing over cash and riding off, I immediately encountered a yard sale. Mostly tchotchkes and stuff I don't need - [record scratching sound] - is that an Olivetti typewriter case? Sadly, I'm at the point where I recognize Olivetti typewriter cases in the wild. It is, and it's an Olivetti Lettera 36, just scintillatingly cool. Look at those Smyrf blue knobs. Does it fit in the huge saddlebags in my new bicycle? It fits. Like it's daring me to take it home. Am I crazy enough to take it home for half off $5? I am.

When I get home, the boy meets me at the garage door and immediately wants to take a ride to his future elementary school. So with my back still sweaty from the backpack, I put his helmet on, hoist him up onto the padded seat, and take off. Within 8 minutes I am at the school, trying to figure out a way to get a very long bicycle through a little gate. We get through and he starts playing on their new and swanky playground equipment. There is evidence of summertime mischief on the playground - lots of "Buzzballz" scattered everywhere, and what more teenagey a place to drink cocktailz out of truncated spheres than an elementary school playground? - but it is awesome regardless. I stop by some more yard sales on the way home and people can't stop talking about the bike. A lady waves at us and we wave back. It feels pretty awesome.

Posted by Jake Anderson at 9:43 PM

Today the boy was asking me to sing happy birthday to someone as I was washing his hands. I frantically scrolled through Wikipedia and got as far as Jean Piaget (1896). And while it seems particularly appropriate to sing happy birthday to Piaget with a five-year-old, if I had scrolled farther I would have discovered that it was also Tove Jansson's birthday, which is much more exciting.
Tove Jansson, such a talent! Of course the melancholy twee comics nerd in me is a big fan of the Moomins, but her novels and short stories are great too. You can probably read The Summer Book in a hammock in a single summer afternoon. Take it from me, highly recommended.
I clicked through to the Wikipedia article, which offers this origin story for the Moomins:
Jansson said that she had designed the Moomins in her youth: after she lost a philosophical quarrel about Immanuel Kant with one of her brothers, she drew "the ugliest creature imaginable" on the wall of their outhouse and wrote under it "Kant". This Moomin later gained weight and a more pleasant appearance, but in the first Moomin book The Moomins and the Great Flood (originally Småtrollen och den stora översvämningen), the Immanuel-Kant-Moomin is still perceptible.
What kind of maniac loses philosophical quarrels with her brother about Kant when she is a youth and then proceeds to draw a caricature about it that goes on to change lives and launch theme parks?
I can guarantee that my brother and I did not get into quarrels about Kant, and while I retain some fondness for the horrific comic I drew in my youth ("Hardon the Mutilator") and his band's songs "Need Bullets," "Gun Kill," and "The Philosophical Ramifications of Ontological Theory", let's just say there is no comparison.
Posted by Jake Anderson at 1:45 PM