Coming soon on the mighty Deathbomb Arc label of California: a career retrospective of my solo music works, spanning back to 1989 when I was yelling into a boombox all the way up to my most recent stuff. 33 songs - value!

It's called "Memory Excellence" after a clunky but great slogan for a certain magnetic-media company, and I made the cover with index cards, an old diskette, and an Apple //c. 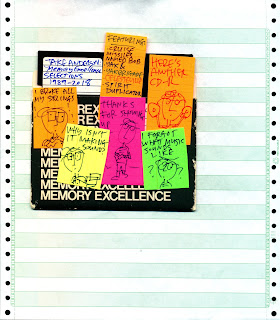 I've made a lot of music in my life, most of it only nominally for public consumption, so it is weird to make a big production out of it. I mean, a cassette isn't exactly a "big production," but it's going to be pro-duplicated on eye-searingly green cassettes.

I'm hoping to make a zine to go with it. Maybe I'll make that happen over Labor Day weekend.

Hoping to post more here soon - I got caught up doing actual work.