How I spent the apocalypse

The Pacific Northwest was a nuclear furnace last weekend, but I wouldn't know, because I was down in California with my old bandmates. Fun times. First time on a plane since my son was born four years ago. We recorded music, drank a lot of wine (see previous post), hung out at the beach, ate excellent food. So good. The whole time, though, it was pressing on my mind that my mild forest home was broiling in 116 degrees of post-apocalyptic heat.

I played my first solo set in forever at the end of the wine party. Unamplified, super punk rock. It felt great. I should have recorded it, but I was at the end of an alphabet's worth of wine tasting (see previous post). Oh well. It was made for the moment anyway.

We recorded in a really excellent studio in a really terrible part of LA. I played a Flying V for the first time. Ridiculous ergonomics on that thing, particularly for a smaller individual like myself, but it played well and I felt 100% like a rock star.

I swam in the ocean in Huntington Beach. I needed to get pummeled a little bit by the ocean and the ocean was only too glad to oblige.

I flew back to Portland after the hottest day in the city's history. I got in late enough that it was only 78 degrees out. I had ridden my bike to the airport. Hmm, do I dare to ride home at 1 am after the apocalypse? I did. The city felt dazed, punch-drunk. Rabbits were hopping all over the bike path. No humans except a few people staring from their encampments in the darkness. I rode past our daycare (power was out) in inky blackness. Traffic signals out, tow truck cleaning up wreckage at the intersection. I could swear I saw stars. I rode over the bike bridge and looked out at the people who were crazy enough to be on the freeway at 1:30 am after the apocalypse.

When I opened the garage door at my house, the house blasted sauna furnace volcano heat at me. Somehow it was even hotter upstairs. Wife and boy were down in Tualatin soaking up my mom's AC. I fell asleep, woke up, and went back to work looking at squiggles.

Wine tasting with the Wine Weirdos 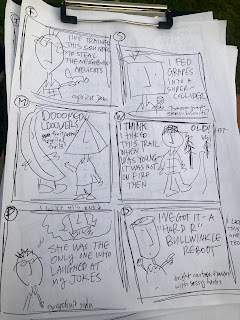 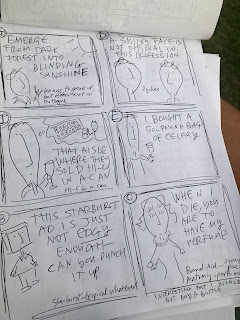 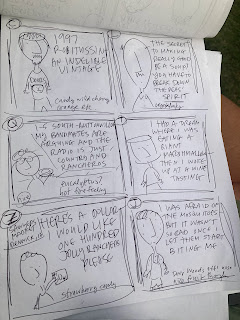 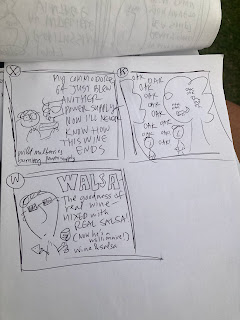 Mike had a ridiculous blind-tasting wine party for his birthday. I drew a cartoon for each wine. I don't know if I actually took a picture of the wine list, though.
Posted by Jake Anderson at 9:32 PM

Terminals - Last Days of the Sun

Classic New Zealand band plays what might be the ultimate climate change anthem if you listen to it just right:

I'm not sure if that's what it's actually about, but it sounds pretty perfect against our wildfire-scented hundred-degree air in (checks calendar) June.
I like the fact that Brian Crook (100% underappreciated guitar genius) misses a lot of notes in exactly the right way. I like the way that Peter Stapleton veers from playing drum iambs to playing trochees without warning, as he has been doing for decades. Another scorched/scorching guitar solo that sounds like the end of the world. Perfect.
The album itself gets lost in the weeds a bit at times, but when it hits it hits.

Posted by Jake Anderson at 9:08 PM

Homer Quincy Smith "I Want Jesus to Talk with Me"

One of those songs that I forget about for years at a time, and then all of a sudden I remember it, and it is just as harrowing and perfect as the first time I listened to it.