Ladies and gentlemen, the 1990s

Today I woke up with some dumb Versus song stuck in my head from Let's Electrify! Probably the title track. I remember selling that CD on the college quad right before graduation, and they were amazed - why are you selling this totally awesome compact disc? Answer: because I will not miss it. So today, after not thinking about said album for nearly three decades, I look through my RSS reader and apparently the album just got reissued. I load it up on the YooChoob Music player and, yup, still boring. I have schlepped many, many other boring records from rental house to rental house over the past few decades, but it's nice to think about the decisive action I took in the mid-90s.

I've been digitizing some of my 7" records from said decade - might as well. Big winner is The Dead C Vs. Sebadoh, which of course features only the former band. What would have happened if they had devoted themselves to playing what is basically hardcore? It could have been all right. And then they take a sudden extreme left turn into ambient mode after thrashing away for seven songs in under seven minutes. Jarring and delicious.

While riding my exercise bike lately I have been replaying Shenmue II, the recent remaster. I'm not sure if I am proud of having played this game so many times (and now on a third console) but I do find it very endearing in the same way you can really love a good bad movie. I love the fact that duck racing exists, and that this most delightful part of the game is really only there if you are either following a walkthrough or being unbelievably obsessive. (I followed the walkthrough. It's OK.) And speaking of jarring and delicious left turns, I do love the way that it goes from extreme urban fight-fight-fight mode at the end of the Kowloon segment to deeply peaceful walk-through-the-forest-while-chatting mode in the Guilin segment. I'm looking forward to playing it again in another ten years or so, God willing.

Posted by Jake Anderson at 9:32 PM

This song makes me want to burst through a brick wall:

Thought I'd say a word about Slack Times' At the Blue Melon Rendezvous EP. Short, sweet, instantly familiar jangle pop sounds, total comfort food. I feel like I've always known this album even though I just got it a few weeks ago. I put it on and 10 minutes later I feel better.

Their Bandqlamp page slyly includes the tag "librarian rock," which of course makes it even more endearing. And in the spirit of librarian rock, the four songs appear in alphabetical order and descending order of title length. Tidy! 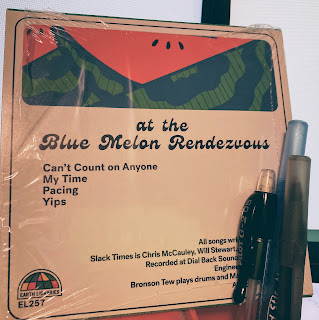