There will always be a place in my heart for woozy wobbly samples falling apart sounds like this. Todd D. has been slinging 1s and 0s since Tape Mountain's blaze-of-incompetence years and his craft just keeps getting more and more refined.
True facts about the Blogggder/YouChoob interface:
(1) Weird poetry in the search results for boo hiss sloppy on paper: 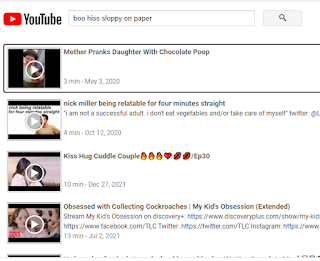 (2) After listening to this, the YouChoob algorithm automatically decided that I wanted to listen to Orange Juice's "Rip It Up" and a lot of songs from Nico's Desertshore. If you combine those two, shake things up, and squint your eyes, it's not the worst comparison.

No hits on Gwoogoo for "Laser Floyd for Kids"? OK, let's make one.

So David Tholfsen! His work with U.S. Saucer in the early 90s, both on record and live the one time I got to see them, was transcendent, totally singular. Their show at my fancy-pantsy college is still on my list of favorite live shows ever. I need to find that tape and upload it somewhere.
Mr. Tholfsen has a new album called Walk with Me which is apparently all songs he made up while walking, to be listened to while walking. His voice is a strong flavor, and the first taste, even for the initiated, is like, what on earth! And then you get used to it, like the water at a hot spring. Is this the activity music I need? It may be the activity music I need.
His lyrical skills have not diminished in the ensuing decades:
Din Plod knee Thrust
Him Tod please must
Win nod free crust
Bin sod cheese dust
I have no idea how he is going to make this work live without cloning himself, but apparently he will be playing in Portland on April 9th at Turn! Turn! Turn! I must be there.
Posted by Jake Anderson at 11:33 AM

The debut Jeanines album got a lot of play around this house. For one thing, its (short) length was pretty much the exact length of the drive from my mom's place to my own, so on days when she was watching the boy while I got some work done, I would often drive home with that CD in my car. The boy would fall asleep somewhere around "In This House," and then he'd always wake up when "Wake Up" played as I turned onto the bumpy Clackamas County streets near my house, and I'd curse my luck. Anyway:

They have a new album coming up soon. Their new single and its super-minimal video are kind of perfect:

although the title has the good-and-bad side effect of unsticking Ronnie Milsap's version of the song of the same name from deep in the muck of my childhood mind. Man, that dude was just like some sort of golden god on rural Iowa radio in the early 80s. They must have just played his five hits on a loop or something, occasionally throwing in some minor artist like Michael Jackson for good measure.
I suspect Mr. Milsap's work (side note: I did not realize he was blind?!) was far from the mind of the Jeanines braintrust when they wrote it, the lead singer being from New York and probably not having been born at that point?! That said, anything that ends up eventually getting "I Wouldn't Have Missed It for the World" stuck in my head is not such a bad thing.
Posted by Jake Anderson at 3:55 PM