And as if on cue, after talking about listening to my own juvenilia, the universe spits this out:

A compilation I made for legendary British tape label Traumatone back in, hmm, 1994 or so? It features just-post-high-school album A House with a Garden, plus various bits and pieces, some unreleased. The Winchester Geese classic "Gumby Dreams of Assault Weapons" had previously included a snippet from legendary X-rated comedy film Wham-Bam, Thank You Spaceman, but now it gets the line:

Anyway, probably worth listening to, I guess? It is not too mortifying.
Posted by Jake Anderson at 10:44 PM

On listening to one's own music

Yes, I listen to my own music all the time. That's why I make it.

When Eric and I invented Activity Universal (Associates), our express purpose was to make music for washing dishes to. I think it worked particularly well for that purpose. Nobody else was making music that I wanted to wash dishes to. So we made six and a half albums of dishwashing music (plus a lot of outtakes that have never been shared for some reason).

I remember reading some David Lee Roth interview a while back where he talked about never wanting to listen to his albums after he made them. Like, he'd worked too hard on them, burned out on them already. That seems crazy to me. I guess I can imagine being a little too burned out if I'd spent two weeks in some smoke-filled 80s studio dialing in a perfect bass drum sound, but fortunately I just press buttons and bass drum sounds come out without much effort on my part.

My car album of choice for the last week or so has been Activity Universal's Flee, the last album Eric and I recorded as a duo before Jason brought his scintillating rhythms on board.*  What a crazy album, totally maddening. Really a terrible choice for driving around, especially with a baby in the back, but also a pretty great choice for driving around, particularly with a baby in the back. There is something great about turning three seconds of audio samples into eight minutes of mesmerizing repetition. Anyway, I'm very proud of it. There are moments where it goes so far into the weeds that they start to look like a garden. Free for download from the Internet Archive at the link above (and give the I.A. a few bucks while you're there).

It's interesting to compare this album to the Cosmonox stuff that Jason and I have been doing lately (and please note that Cosmonox is playing on Jan. 12 at the Firkin Tavern). Cosmonox's 4-track tape-based approach allows for more dramatic changes - choruses, bridges, sudden dropouts, etc. - and Jason has a strong sense of pop songcraft in how he makes the tapes. So it feels worlds apart in some ways from Activity Universal, even though it's basically the same idea -  bookish hermit takes educational audio device and abuses three seconds of audio until the song is done eight minutes later.

*See next post for comments on listening to one's own music.
Posted by Jake Anderson at 10:10 PM 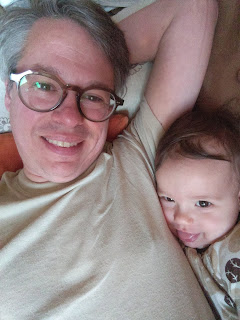 So, uh, I'm a stay-at-home dad now for this really great boy? I'm totally not above adding cute baby pictures to this blog. This was taken right after li'l dude took a two-hour nap on my chest. Sometimes I'll wake him up from an afternoon nap and then he'll fall asleep again in my arms after I give him some milk, and then I'll lie down on the couch and he'll snooze there, warm and quietly snorfling, and I'll bring out the book or the phone or the antiquated handheld video game system that I've conveniently stashed nearby, and I'll read or browse or play for hours, and it is just the best thing not to have the option not to goof off.
Posted by Jake Anderson at 9:18 PM

Gochujang and the boldness of shapes

The boy and I went to an estate sale thing in a Milwaukie strip mall* today. Not too much of interest, but they had a particularly sexy vintage staple remover** for 30 cents, plus some of the deceased's as-yet unexpired foods. The (presumably) Korean woman at the register looked a little surprised that I was buying it. She told me that I should immediately go and buy some roasted sesame oil if I was going to make bibimbap. On my way out the door she said "Bye-bye gochujang," possibly to the baby, possibly to the actual gochujang. I will need to use that line.

(*It was being held in a space that formerly held "Susie's Baby Outlet." When Joanie and I would drive past that sign, we'd always chuckle in our most Buttheady voices. We are horrible.)

(**Staple removers are the sexiest office products because they are dangerous. This one is particularly sexy in spite of its beigeness.)

The boy has a "Brainy Baby Laptop" with the requisite buttons and lights. When you "boot up" this laptop in "shapes" mode, it plays a little song that goes like this:

It doesn't work. The second half of the jingle feels like it's 1.7 times as long as the first part, like a sweater with one arm too long. And for what? To cram the word "bold" in there? In what sense are shapes bold? Stupid lumpy jingle!!!!!
Posted by Jake Anderson at 8:51 PM

Dancing around with the baby in the weird December sunshine to Joe Hill Louis. Super great wild primitive one-man-band blues from Memphis back in the day, very satisfying. I've never really been a huge blues fan (and watch me struggle when asked to play the most basic 12-bar stuff), but this totally hits the spot.

Apparently he was known as the "Pepticon Boy" after DJing a show sponsored by the patent medicine in question. Why do we not get products with names like Pepticon these days?

Yesterday I was hanging out in my favorite local grocery liquidators. As usual, they were playing some cable-radio station, and Neil Sedaka's "Laughter in the Rain" came on as I was checking out. This had the not-unpleasant side effect of getting that song stuck in my head as I walked home, so I looked online to see if Gwoogwoo Play Muzik had some of his 70s comeback stuff available. They didn't have what I was looking for ("Bad and Beautiful,"which my dad was very fond of), but they did have an album that he made for kids, Waking Up Is Hard to Do, in which he adapted various hits from his career. Among others, "Calendar Girl" became "Dinosaur Pet," and, most importantly, "Love Will Keep Us Together" became "Lunch Will Keep Us Together." So glad this exists, even if "kid music" typically drives me up a wall.
Posted by Jake Anderson at 10:54 AM

Crazy person stereo, plus the Cannanes

I've been digitizing a bunch of old tapes and records recently on my terrifying Gordian-knot-of-wires stereo setup. In order to accommodate my potential desire to record from computer to minidisc or minidisc to computer or cassette to either of the above or vice versa, I set up a Radio Shack tape selector thing with a ton of wires sticking out of the back. Of course none of them match and most of them are too long; fortunately, I can hide the evidence of crazy behind a playpen. I would have used ye olde Sony Tapecorder Selector (as immortalized in song on Transcriptionists), but it finally gave up the ghost. Alas.

Anyway, lots of delightful things to be heard in my old tape collection. Lots of wonderful adolescent awkwardness (of course), a fraction of which holds up OK, and most of which I have withheld from the baby for obvious reasons. Currently I am listening to a tape I made of the Cannanes playing at the Huntington Beach Public Library (!) in 1996. Of course they are great. Something I had forgotten was how snarky and funny David Nichols' inter-song banter was. I would pay - well, at least a few bucks - for a "Having Fun with David Nichols on Stage" album. "We've released about 700 singles in the past three weeks. CDs are ten dollars. You all look stinking rich, so you should buy one." I also regret not buying the cassette version of their self-titled album with some Nichols doodle and the epithet "New Zealand Sound-Alike Band" on the J-card. Alas.
Posted by Jake Anderson at 8:10 PM