During the long Oregon winter I like to ride an exercise bike, especially now that I don't have an office job to commute to. And yes, I do have two exercise bikes, thanks for asking.

Usually I ride on the recumbent upstairs because it's pretty easy to veg out on that thing with a DualShock controller in my hand. And it turns out that really tedious gaming conventions - fetch quests, grinding, etc. - actually end up being a lot more tolerable as background activities for exercise. I recently played Ni No Kuni, which is just chock full of deliver-this-doohickey-to-this-person-in-another-city pointlessness, and it totally worked, just taking in the pretty virtual sights while going back and forth and back and forth looking for adorable electronic critters.

However, recently the cheap pedals on that thing gave out (the bearings were making unholy noises one room over from a sleeping preschooler, not an ideal situation) so I headed down to the spin bike in the garage. Not only is it a much more vigorous workout, but in the garage I only have an old CRT TV with a built-in VCR. Kind of nice to work my way through the backlog of VHS tapes that I haven't been able to get rid of.

Tonight's entertainment was R.E.M. Succumbs, which is almost exclusively made up of the members of said band being filmed on a Super8 while they artily tromp rockstar-style around various Georgian backwoods - the Howard Finster estate etc. I remember this being a bit of an endurance exercise even when I was younger, but put that together with actual endurance exercise and it was kind of next level. It made me long very much for the sort of life moment where I could just look at trains or weird old dogs without having to multi-task constantly or maximize precious down time. SIGH.

Do you like melancholy songs in Basque? I do.

Le Mans' version from the B-side of the "Un rayo de sol" single, at least in the 90s in America. Really great as well. I should do a fanboy post on how much I like the stuff that Ibon Errazkin and Teresa Iturrioz have done - Single are great and really underappreciated. 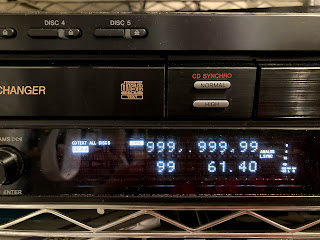 I'll be doing some work to polish the final third of this album, the Theory Internal EP, which I think is particularly good, but I thought I'd put this up on the bloog in celebration.

Just a reminder that the new Cosmonox album is available on Bandqlamp. It's awfully good if you like squeaky tape sounds, alien funk, noise, squelchy Casio sounds, found voices, or several of the above.

I keep listening to Norma Tanega. The difficult second album is available on YouChoob:

Her first album is such a breath of fresh air that it was a little hard to get myself situated in the dank pathways of the second one. Definitely more a product of its time, with the requisite guitar dude soloing over everything, songs that evoke Neil Y and Joni M. etc., but the deeper I get into it, the more the songs shine. Lots of autoharp in among the dude guitar sounds, which is a nice touch.

In some ways, it reminds me of Yoko Ono's Approximately Infinite Universe, which prompted the same eww-why-won't-that-guitar-player-shut-up feeling in me the first time I heard it. Eventually the strength of Yoko's songs finally blasted through its early-70s-yeahhh-man trappings and I learned to love it, wah-wahs and all.

I've been filing some CDs in boxes. I know, exciting, right?! I was delighted to find that my own Spirit Duplicator CDRs got to hang out right after Souled American and Spherical Objects in my collection. You could do a lot worse. S has a lot of good stuff.

Back when I was making music under the names Yak Brigade and Celesteville, I found myself displeased with the company I kept. Y has always been a weird backwater. I guess there's Young Marble Giants and Richard Youngs. Youth Brigade (DC), of course, and the Yips (Blue Flannel Bathrobe Butterfly is still pretty great). And C has a lot of chaff in between the must-haves (Camberwell Now, Can, Cannanes, Charalambides, Gal Costa).

I'm just about finished with the third installment of mini-CDRs. It's going to be called Theory Internal. Like all the others, songs are in alphabetical order (with a bit of poetic license here and there). It has been liberating to let the albums sequence themselves. I've changed a few song names to enhance album flow, which is OK - I think "Letters Removed" is a better song title than "Clap Clap Clap Clap Clap" anyway.

Weird comparison: If you ignore Canto I, the Divine Comedy is also three sets of 33 items. Currently deciding which of the EPs is the Inferno.

Posted by Jake Anderson at 3:44 PM

The internet winds recently blew me to an old Canadian show about computers that aired in the early 80s and which I clearly remember playing on Iowa Public Television in the day:

It is weirdly soothing. Part of it is the ASMR-level* microphones on the computer keyboards and cassette deck lids, but mostly it's Luba Goy's lilting voice. Here she is pronouncing "ROM pack" and "Atari" in the best way possible. Quality diction.

* My boy is obsessed with marble run videos on that video site, and there seems to be a lot of crossover between the marble world and the ASMR world. He ends up watching a lot of mind-meltingly tedious ASMR marble videos, but thankfully there are a few good ones out there that end up sounding like Harry Bertoia sculptures with a lot more clacking of small spheres. Someday you may know what I'm talking about.

Posted by Jake Anderson at 9:32 PM