Stacks of CDRs and _Marimba Themes_

There is something great about a spindle of CDRs separated from their cases, possibly forever. Grab one at random and put faith in an earlier version of yourself. Try listening. It's probably good. Maybe it's what you want to listen to right now.

This one has good artwork. Who was spraypainting CDRs like this? Put it in the player, 20 tracks, 66:48. Hmm, there are marimbas and some pleasing electronic manipulation thereof? I'm guessing this has to be something that Ryan did, maybe with Alyssa? Go to the Eet bwandqwamp page - no albums have 20 tracks. Maybe it was Ryan solo under the Ifsh name? Aha, "Marimba Themes"!

Now I am listening to it. Everything plays just fine despite being on a spindle for years and years. And it is perfect music for right now - just at the back of my attention, occasional plinks and blurps and glitches, delicate and very pleasing. Maybe you need it?

My boy had been listening to "The Rainbow Connection" at daycare today, so I mentioned that I had the Muppet Movie soundtrack. After searching through my horrifying piles of hoarder vinyl, I found it - a really beat-up powder blue thing with my name written on it in elementary-school cursive and the call letters of KNIA, Knoxville, IA written all over it. I guess my uncle must have grabbed it from the station where he worked? Pretty sweet gift for young me. 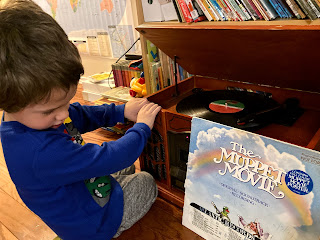 Anyhow, this record has some miles on it. Scratches, skips, warps, you name it, but somehow it sounded pretty good on my boy's little record-destroyer turntable. We played "The Rainbow Connection" and that was sweet, but then he decided to play "Movin' Right Along" about twenty times in a row. It holds up fine. He'll probably wear a hole in this record.

There's one spot toward the end where the bass player walks up to the 1 and it's the hokiest thing*, but it is played with absolute conviction. The sort of conviction that says, yes, I am recording this song that is a duet between a frog and a bear getting lost in improbable ways across multiple countries while driving a Studebaker, and, oh, receiving union pay for doing so. What do you want to make of it?

*(Same bass trick used to excellent effect twice in Prince's "Controversy". I am going to steal it for everything I do now.)