I didn't sleep well the other night and so I sleepwalked through yesterday listening to this crazy song over and over again. Somehow it made sense.

Needless to say, great, and also something that I'm a little embarrassed to watch.

Past stuff of hers has had the same Lisa Frank in a funhouse mirror vibe - her aesthetic appears to be completely consistent - but this is the next level.

Posted by Jake Anderson at 3:47 PM

Currently rocking Ibon Errazkin's delightful album Foto Aérea. I would use the word "lapidary" because that's a word that quality reviews use to describe things that are jewel-like, poem-like, and since this is a quality blog post, "lapidary" is the word I am going to use.

Guitars, probably sampled, that swoop in and out and around pianos, also probably sampled. The album has its own internal language. Some of the songs sound similar as a result - as aerial photographs often do - variations on a theme.

Speaking of its own internal language, the video for the title track is another jewel, a deadpan little poem that states and restates:

Elefant Records' Bandcamp claims that they have one copy left as of 5/24/22, so hurry! Or the streaming services will set you up. I checked my LP and I have copy 292 out of 300. Artificial scarcity - lapidary.

Happy 110th birthday to Joseph Lloyd Carr, whose novella A Month in the Country ranks pretty high on my list. You are encouraged to go grab a copy at your local library and, if howlongtoread.com is to be believed, emerge two hours and fourteen minutes later a better person. There are still ten hours in the day here in the Pacific time zone. You can do it.

I'm also slowly making my way through the rest of his oeuvre, which is much crazier and also much harder to find, but also delightful in its own way. And if you don't like reading, you can spend some time looking at his delightful county maps.

Posted by Jake Anderson at 1:59 PM

Physical media, hmm. It gets lost sometimes. You throw a tape in the back of your 1996 Geo Metro and it never returns. It gets digested. You make the choice to move back to Oregon after a calamitous end to your California Experience and the US Postal Service mislays a chunk of your alphabetized records, your rushed and inadequate packing job resulting in Bugskull records being scattered all over the floor of some whirring monster warehouse somewhere.

I owned the Bruces' Hialeah Pink on vinyl Back In The Day and it was part of the Bs that didn't make it in the 2000 US Postal disaster. Later, I bought it on the much smaller compact disk format. It's still with me and ready to console me in dark times just like it did on those 3:30-6:00 a.m. radio shifts back in eucalyptus-scented California. Nearly thirty years later, the flaws in the lyrics are a little distracting, but the fidelity and feel are completely great. I have an instinctual dislike for albums being priced at the default $7 on Bandqlamp, but in retrospect I would totally pay $3.69 in 1995 dollars for this album and its bonus tracks.

I think I've owned at least three versions of Sauvie Island Moon Rocket Factory's Mudpuddle Park, one self-released, one on short-lived Red76 Records (bought on steep discount at Ozone Records' going-out-of-business sale, sigh!), one on Italian tape label Best Kept Secret, who put out Minmae's dark-night-of-the-soul A Record About Us, and hello to Alessandro and Dave K and Sean if the Internet ever brings any of you to this page, and anyway, these songs will always still be clattering around in my head, long after its creator and its hyper-specific Portland-area geographic references (12th 'n' Sandy 'n' Burnside) have scattered off to wherever it is things go.

I had forgotten about this panel from the inside flap of my 1994 tape Flavor House: 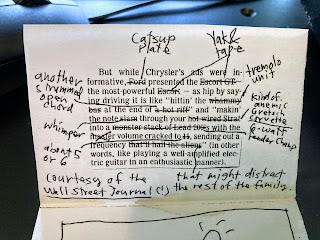 There are times I miss the Gretsch Corvette/Fender Champ combo I had in 1994, but "anemic" was not an incorrect word for that thing's pickups. That said, my current Yamaha SBG200's pickups are also anemic and I love them for it. Hmm...

Posted by Jake Anderson at 3:33 PM

All hail the dollar bin

I took a little detour on my bike ride yesterday and stopped at a certain record store. Man, used record stores in 2022 - weird scene! I didn't find much when I was flipping through the exorbitantly priced and largely uninteresting bins at shoulder height --

and then I crouched down to the dollar bins at my feet, and all of a sudden things got more interesting. For one, I have a lifetime of knowing which records I don't need to linger on, so processing them is very quick. And I feel like the rate of hits for me was higher - I found Elton Britt, Conlon Nancarrow (!!!), Big Dipper, Queen Ida, etc. I mean, nothing mind-blowing (Mr. Nancarrow aside), but solid things to put on and make the day better. I spent $6 (didn't want to overload my bike bags, which were already full of library books) and left feeling a little better.

Which begs the question: How much of my musical taste is based on a lifetime of trawling the dollar bins?