The exquisite pain of library piracy

The kids today with their Rhapsody and Napster and Soulseek and Limewire and Qobuz.
They'll never know the exquisite pain of checking out abused albums from the library and realizing that the album is like 49 minutes long, so they'll need to either leave a lot of space on a C-60 or leave a couple songs off one side of a C-90.
I found a bunch of Elv*s C*st*ll* CDs at a garage sale recently. He's always one of those marginal artists for me - I enjoyed his stuff when I checked it out from the library in my youth, but now it's pretty clear that he suffered from getting a lot of smoke blown up his *** early in his career and turned into a giant *******. Still, *mp*r**l B*dr**m is kind of fascinating, particularly when I get the CD for 25 cents. The *ttr*ct**ns are a pretty great backing band and there are some good ideas. But I wish there was someone there to tell him to stop going overboard. I ended up omitting "*lm*st Bl**" and "P*dg*n *ngl*sh" from my C-90 back in the day and I think those were good choices.
Bl**d *nd Ch*c*l*t* is just terrible. Points for the Esperanto but negative points for errors in the Esperanto.
In any case it feels good to have CDs. You can't throw Deezer out the window.
Posted by Jake Anderson at 9:29 AM

If you ever have a bad song stuck in your head, or if you just need the world to be more ridiculous, here is your solution. Also good for dance party Thursdays at home - just tested it with a 4-year-old on my shoulders. Certified hit.

I listen to this more than I should admit.

Posted by Jake Anderson at 9:22 PM 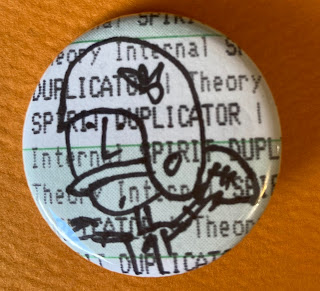 I've got a new album! And forgive me for saying this, but it's pretty great. 33 tracks of pointy jangled sharp pop music. Yours for either free at Internet Archive or, in a new development, $1 at this little website called Bandqlamp.

This ostensibly concludes my 99-track CD, and I've distributed some proto copies to the world, but I'll probably end up severely editing things and going with 75 tracks or so. It's better that way.