RIP Fritz Mondale. I wrote a song that was sort of about him back in the 90s.

In 1984 I was growing up in a town of fewer than 50 people in the upper Midwest, one state down from Walter Mondale's stomping grounds of Minnesota. Not many Democrats in that area even then, my family being among the few exceptions.

My 6th grade teacher had us make campaign signs for our preferred candidate. My classmates offered up zingers like "Vote for Reagan And You Will Be A Winner." I made one that said:
Q: How is Ronald Reagan like a chocolate-covered grasshopper?
A: Take off the candy coating and all you're left with is a minor nuisance.
Not so bad for a 6th grader, right? But it turns out people wanted candy.

I loved his honesty and his super-dry Midwestern wit. That time in 2002 when they asked him about the problem of his age, and he responded, "I've looked into it and there's not much I can do about it."

My 1984 Yamaha SBG200 guitar has a Mondale/Ferraro pin on the strap. Appropriate for the year, right? I will wear it proudly next time I actually have a chance to play in public.

I heard Mouth Painter's entire Arkturus Suite (side A at least) on the lovely Backroad to Nowhere show on Xray.fm a while back. I always like it when radio deejays play 20-minute-long songs because it makes me think about when I was a college radio deejay and I pulled that kind of stuff all the time - maybe I had failed to plan enough music for my set? Maybe I was trying to finish reading something before a test? Maybe I was pitching woo or discussing the merits of some obscure band from New Zealand?

After hearing this and loving it, I ordered the tape off Bandqlamp and I'm pretty sure they hand delivered it to my door. Hyperlocal, then. It sounds like rain, as it should.

Pedal steel clouds, flute, delay, is that a musical saw? Timeframes and tonality shifting all over the place, not graspable at all but very pleasant. A good fit for the tape medium because any wow and flutter will only enhance the sound of the recording. I mean, my mid-life crisis garage-sale tape deck is pretty damn solid, but still, it's a tape deck.

It is pretty easy to crap out floaty 20-minute instrumentals, but it is not easy to keep them compelling. This one keeps me coming back at weird moments.
Posted by Jake Anderson at 6:05 PM

There are several ways to figure out what to listen to. In descending order of Apollonian temperament:

Today I'm going with #4. This approach naturally led to Rose 4 Bohdan's crazed early-aughts epic album Major Label Drugs. Of course. Lead Bohdan (disclaimer: I've known him for nearly half my life [!!!] and he's put out some of my stuff) Brian M. has always specialized in situations that were both highly friendly and yet somehow deeply weird. So this album naturally pinballs between endless inner-space drone epics, dudes singing about Snapple and boobs, and of course the best track, which I often find myself repeating:

Repeat forever and digitally slice it up until it is scarcely recognizable. Great. 7 views on YouChoob - will you be the 8th?

Posted by Jake Anderson at 3:37 PM

Charlie McAlister's songs come up pretty frequently when I have my celestial jukebox on shuffle - probably because there are so many of them. And I haven't even digitized half of what I have.

Today a couple songs from I Haven't Any Sea Legs came up. What a great album, and what a generous one. His mid-90s tapes were janky little universes that I could carry around to temp jobs and get lost in while I did data entry. The work I'm doing now is a little higher-level and I can listen to music on some excellent speakers rather than half-broken cheapo headphones from Target, but the music is still great. 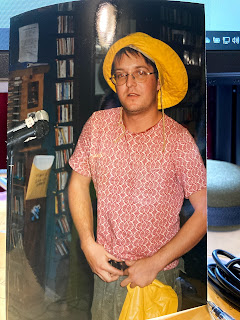 I thought I'd take a moment to write about Bushwalking's outstanding No Enter album. I think I got fed this one as a recommendation by Rdio (sigh) back in the day after listening to lots of other stuff in the incestuous Australian scene, but this one hit home pretty hard and has stayed with me.

The cover has one single pensive downward-cast eye accompanied with aqua and orange eye shadow. Avoiding eye contact, just like I do.

Totally fierce medieval drone grooves, two female lead singers operating as a single titanic/Teutonic vocal and rhythm unit, dude guitarist splattering semi-tonal stuff on top with uncanny slapback like some sort of glass-shard frosting. Not a sound I've heard elsewhere, even in the postpunk genre that I guess this would fall into.

I listened to this one over and over again during the dark nights at the end of 2016, after that gross dude was elected here in the US but before he took office. The last few months before my boy was born. I would listen to this while riding my bike home from work, the calm cold dark all around me, the menacing drone from the freeway on my left echoing the drone from my little Bluetooth speaker. Occasionally I would come across someone who was walking or living on the bike path and there would be an awkward attempt to pause my speaker. As I approached my neighborhood, "Green Light" (the unsettled song) would play, and then as I rode through the potholed familiar dangerous streets of my neighborhood, the flutes of "Always Here" would guide me home. Several times the last few notes played just as I went to open the garage door.

The various players here continued on to do excellent things after this, but this one never really got the attention it deserved.

Posted by Jake Anderson at 2:57 PM