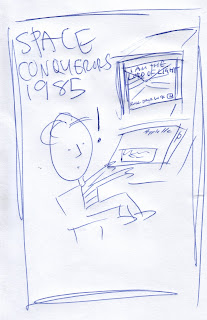 So let's start this thing with a reference to something that I'm not sure anyone remembers and that I'm also not entirely sure exists. The game: Space Conquerors. The platform: Apple II. The time: the early 80s.

I'm sitting in some vehicle or other in the parking lot of some discount store in Fort Dodge, Iowa. It's cloudy. My dad comes out with a diskette. "They were selling these for 50 cents," he says, and I take a look. Space Conquerors by Softsmith. It came with instructions - long since lost.

What's the game all about? You're an explorer in space, and you can choose one of three jobs: miner, farmer, missionary. Terminology may be inaccurate, but let's GO!

Miner: You scoot around in exotic unpopulated planets, digging digging digging as your oxygen ran out in some insidious atmosphere. It was impossible, so I would sometimes go with:

Farmer: You're attempting to herd space livestock (heffalumps? was that the right term?) around in four quadrants of a field; they fertilize your crops, the crops feed them. You need labor, so how do you get it? No robots, no space slavery, just the MATE command. Once you've homesteaded, you type MATE. The disk drive, no joke, makes some pretty obscene sounds that I'm sure wrecked the school's disk heads, and then Mrs. Lookingbill looked over with a raised eyebrow, but you're playing it cool, and the computer asks you to ROLL YOUR LUCK; if you succeed, "YOU WILL SOON HAVE A CHILD." Well all right!

Missionary: You were a space missionary for the Lord of Light, so you travel off to far-flung places in the galaxy, set up shop in some public square in one of the little towns, and start preaching.

What do you preach about? I'm not entirely sure, but I remember typing "preach" over and over and over again and rolling my luck a lot and watching little pixel-blip people show up or leave. And then, as more people show up: something like A CUP OF BLOOD IS PLACED BEFORE YOU. Well, what are you going to do? DRINK. And then you roll your luck and it fails and the crowd starts stoning you, stoning you with little lo-res rectangles that go peep-beep-pip-beep-peep, and then you roll your constitution and it fails, and then you roll your luck! Roll! Roll! Roll! And then the screen is taken over:

I AM THE LORD OF LIGHT.

The universe is empty and full of unsatisfactory job options!

No-one will ever know about this game - the only Google result will be someone buying this game for $65 on a certain internet auction site!

The antiseptic empty ring of commerce in the empty cosmos!

We're going to relaunch tapemountain.blogspot.com as the newly designed Tape Mountain Museum. Anyone who knows me knows that I have a lot of weird old items and a lot of weird old memories - so let's put them on display. More later!
Posted by Jake Anderson at 10:02 PM