So sad to hear that the world has lost Hamish Kilgour (of the Clean, Mad Scene, etc.) A great drummer - his spirit of lightness took the Clean's Vehicle to another level - and a very underrated singer/songwriter.

Currently listening to Boodle Boodle Boodle on 33 instead of 45. It sounds pretty good that way. My boy and I recently picked that one up on clearance from the deeply unlikely record store in someone's converted garage a couple blocks from my house: 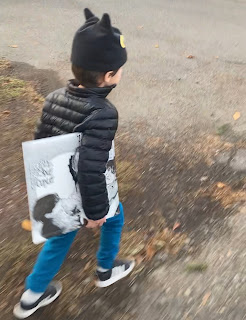 I will always have a soft spot for the Mad Scene too. They never quite reached their potential on record, but the one time I saw them live - I think maybe at the same show where I saw Wimp Factor 14 in NYC at at CMJ sometime in the 90s? It was just Hamish and Lisa on twin electric guitars. Warm, peaceful, totally unassuming, totally underattended. I think there were green lights. I remember that Hamish was playing a Gretsch Corvette (also my guitar of choice at the time), and I struck up a small conversation (not my strong suit, especially then!). He dealt with my awkward fanboying with ease and recommended some other music for me to listen to. I walked out into the New York streets at night, completely out of the world.

Now I'm listening to the Mad Scene's Blip, which kind of appeared and disappeared in 2012 a la its title. Its carefree inconsequentiality is very pleasing. Of course they do their best work a decade and a half after everyone stops listening.

Posted by Jake Anderson at 2:53 PM