Frequent readers of this blog (i.e. no one) will know that I'm kind of bleah on vinyl in general, particularly as a 2021 proposition. But it had its place in certain times, scenes, etc. One particular vinyl scene that I miss: The 7" record from the 90s.

Oh, I love these! Maybe I should start a little series for these. Give them some airtime 25 years later. 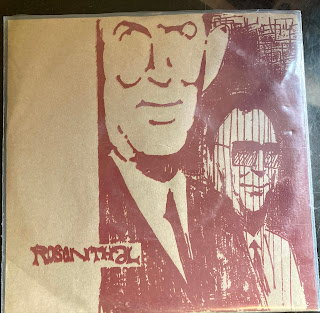 Today I am looking at what appears to be the only thing ever done by Rosenthal (only appearance on Discqogs an appearance on some Yo-Yo compilation). Five songs, super haphazard 4-track recording quality, certain 90s cliches in effect (disaffected singing, lack of bass instrument) but a bit outside of time as well.

Three dudes, first names only please, living room sound, address listed at a house next to the Triple Nickel on Belmont in Portland, 14 blocks away from where I would end up living a few years later, probably a $700K house at this point (!). I must have had some moment where they were at the same gross early-00s basement house party I was. Record label listed as being in Irvine, so I must have met someone when I was down there and somehow the record ended up in my possession? Who knows?!?!

Totally unassuming but also pretty good. The sort of thing that hides behind your speakers, but it doesn't look bad there. Pleasant if not catchy. Obscurity forever. I will take that as a virtue.