Some people are early adopters of technology. Not me. But I have always enjoyed being an early scavenger. Do you remember how you were listening to music in the mid-aughts? I recently uncovered a stash of mini-CDRs with mp3s on them: 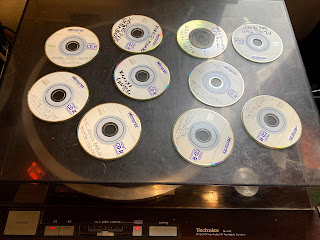 I owned a weird little Philips CD player that only played mini-CDs (talk about dead ends!). You could burn 4 or 5 albums on a little disc, then take the weird little CD player into your mid-90s Geo Metro, plug one appendage into the power/cigreet lighter, plug another appendage into the tape deck, and presto! You could be listening to your favorite Amon Düül II albums that you acquired... somewhere.

You'll note the names of several mid-aughts Portland bands in which I played. All culs-de-sac as well (in several cases, due to my own financial/emotional inability to go on tour/commit to the R&R lifestyle). All great though.

Ever since that weird little Philips CD player disappeared, these CDRs have basically been useless, so they've just been floating around boxes in my garage, naked, getting more and more scratched up. A wiser person would have just tossed them a decade ago, but somehow I never got rid of them. So yesterday I put them in my weird CD player that I bought on OfffrrUpp - whose main virtues are (a) being cheap, and (b) not being afraid to play any CDR, no matter how cheap or damaged - and they played. Just like that. So I've been having a weird third-wave pirated-media nostalgia experience, listening to old MP3s of, say, Ege Bamyasi, which I _had_ originally taped from my college radio station back in the 90s, but which sounded totally futuristic even then, and then I reacquired that music through the wonders of sketchy late-90s early-aughts internet, and now I'm in the future feeling nostalgia for multiple backwards vestigial technologies. What a world.