I biked to the record store

Today I took the afternoon off and took a long bike ride. It was a warm day even though the sun is starting to do that horrible thing it always does at the beginning of October at the 45th parallel. A young and glamorous couple was sitting in the sun in the yard of my wife's old elementary school, bare midriffs, smoking.  More bare midriffs at the used tire store. I grew impatient with people doddering in the bike lane, but at the exact moment I realized that I was going faster than everyone else, I was passed by a stealth bro, somehow going twice as fast as I was despite exerting zero effort. (Not an ebike.) With long hair flowing in the autumn breeze, he sat up hands-free and disappeared off into the distance, young and infinitely powerful.

I had a hankering to get some stuff from My Vinyl Underground/Jigsaw Records for the first time since the cooooooovid hit. I got a bunch of tapes (gotta love the $5-7 price point in 2020) and put them in my bike bag to head home. One of the tapes is a lovely thing by a couple Australians whose work has been there for me in weird times. I'll write about said work next.

Another thing I got was Elton Britt's Yodel Songs because the light this time of year always reminds me of my dad (it's almost been ten years) and because at one point when I was in high school, he and I and Bob from our church formed a yodeling country band for a talent show. My dad did the yodeling and he was good. We did a song called "That's How the Yodel Was Born" which is somehow not the same "That's How the Yodel Was Born" that is found on Mr. Britt's LP. Somewhere I have a tape. It was a struggle to keep my hyper young fingers playing I-V-I-V on the bass guitar, but somehow I did it.

Posted by Jake Anderson at 9:43 PM

News: CDs are cool again! Right?! Just like blogs! Decouple your listening and social media from gross algorithms and the all-glowing all-seeing eye in your pocket. Give me a thing that I can listen to or look at anywhere, sequentially, in some sort of artist-determined order, nothing automatically added to my "next up" column or tracked by Big Data. Plus they play in my car, in my cheap little stereo, on my crazy person stereo in the office. I am totally ready for the CD comeback once this dumb vinyl thing burns itself out. The idea of paying $20 for some big clunky LP made out of dinosaur blood that I'll have to tote around until the end of my days is just ridiculous. (NB: Old cheap 45s from the 50 cent bin are fine. See previous post.)

Plug: I am glad that Trouble in Mind Records continues to indulge my love for cheap physical media by offering CDs of most of what they do (not CD-Rs - real CDs!), and in space saving cardboard sleeves no less. Everything that is bad about LPs is good here. Their recent reissue of the Possible Humans album is a case in point - that first song "Lung of the City" sounds so good on crispy digital through my crazy person speakers from the 70s. Not ready to give the entire CD a blanket Tape Mountain Approval yet, but what an opening song.

Posted by Jake Anderson at 4:29 PM

We're in the middle of these epic epic wildfires, the closest of which is closer to us than, say, the other side of Portland. We haven't opened the windows in days, and the horrific air quality (worst in the world!) is keeping us inside all the time. Boy's daycare is closed, so it's been all preschooler all the time.

Fortunately, we are pretty good at not leaving the house (song 1 here is a good example and a statement of purpose) and we've been staying inside. Boy is playing with cars and balls and, most importantly, playing records: 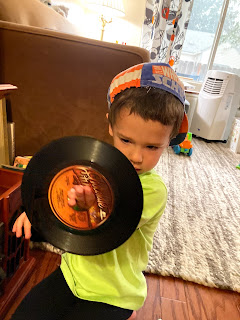 "Freaky Dancin'" - Cameo (the list of cities is of interest)

"Sheena Is a Punk Rocker" - Ramones (always a dance party)

He also got way into a couple songs from the Chills' Submarine Bells after hearing "Heavenly Pop Hit" on the radio this morning. Pretty good taste for a three-year-old.

Lately he has taken to the official Atari game of Gang Wizard, "Freeway." What a great game - the sole objective is to get a chicken to cross the road - and it's one of those games that can be explained in under ten words, sort of like Pong's "Avoid Missing Ball for High Score." "Cross Road, Avoid Vehicles." He gets it.

I bought a Braspberrby Bpi on that internet auction site - they gave me a $25 discount in honor of their 25 year anniversary, so I figured I would buy an item on which I could emulate the things that I bought and sold on that internet auction site 25 years ago. Totally circular. Anyway, I've installed Bretropie on it, and so far it seems pretty slick, but I think the thing I would most like to emulate is the amount of time I had back in the late 90s for futzing around with old videogame consoles. Time bought at the expense of not doing work for grad school, sigh (see song 13 here.)

Posted by Jake Anderson at 7:55 PM

The new album is here! Available for free download at Internet Archive:

33 new songs on this follow-up to Duplex Cremes. Part of a ridiculous life goal of creating a 99-track CD. 2/3 of the way there! Songs about poverty, regret, memory, failure, exercise, and the Tualatin Public Library. Full album cover (mimeographed on index cards) is available as a PDF - see associated files.

I like this album a lot. Certain themes come up again and again. I may have used a certain gimmick to come up with song titles. Whatever it takes to make an album come together. Most songs were recorded in brief, frenzied sessions in my cluttered garage before my songwriter's group on Sunday afternoons, since my life has been busier than ever during these crazy times.

I shot some footage for a video for "Trim Twist!" and may need to actually assemble that at some point. It is highly silly, as is the song, inspired by a piece of garage sale exercise equipment.

Anyway, take a listen. If you'd like an actual CD and live in the Portland area, I can arrange to get one to you. If you're outside the area, drop me a line. Email is on the main tapemountain.com page.

All I Feel Is Yes archival series

I was in a band called All I Feel Is Yes. This band is on permanent hiatus, but we had some good times. Here is one of my favorite AIFIY songs:

I am proud of my super honk prog bass line.

It's up on Bandqwamp for pay what you want, the "what you want" going to Rosehip Medics here in Portland.